An expedition to an exotic foreign city. An assassin in hiding, waiting to strike. World changing discoveries.

The Springhaven Museum’s expedition to Bone Port is underway! Opportunities await Lenore and her colleagues, but discovery and enlightenment are not all they will find in southern Invarnis. Back home in Springhaven, Rook is searching for answers but seems to find only more questions. Who took out a hit on Lenore? What is Bloodstone? A trail of clues becomes fraught with danger, and the quest for truth might demand a price he’s not willing to pay.

The land of Invarnis is on the precipice of a new age, and the lives of its inhabitants will never be the same again. The pursuit of knowledge is a noble endeavor, but sometimes one must ask: how much is knowledge worth? Some things were locked away for a reason…

Rook turned the tiny vial between his thumb and forefinger, examining it. He’d had the thing for a little over a week now. The Reaper had given it to him for free. Free?! When Rook had asked why, Reaper had just wheezed something about having an exclusive source and wanting to build his market. Was it truly the same substance? If not, what was Reaper trying to pull? Heaven knew. The Reaper was a mad creature, always was playing by his?…her?…its own enigmatic tune.

That was why Rook had been so shocked to see Dmitri there. Dmitri didn’t belong with those mad men and women, hanging on Reaper’s every word like some kind of divine savior. Rook had trouble believing his old contact could have fallen so far. Dmitri might have been proud, but he was always fairly level headed. It made Rook even more distrustful of the clear liquid in the little, green bottle. What if this was some kind of nefarious plot by Reaper? What if the substance in the bottle did something completely different? Was that paranoid? Sure, but that was how Rook had stayed alive for so long.

Kieran perched on the rocky edge of his little hollow. Looking out over the endless expanse of water, he breathed in the salty air. The sea was calm tonight, the waves against the cliff wall below making little blup-ksh noises. The bright moon bathed everything in pale luminescence, stealing color from the world. It was a wonderful night for stargazing and staying out late and bonfires, but a terrible one for exploring the jungle. Not that that stopped him from looking underneath the waves. He looked back into the depths of the cave. It was just as Cali had described.

Kieran looked back to the horizon. He shouldn’t need anything else on this excursion, so he removed his waistcoat, shirt, shoes, and socks and dove into the water below. He did not need to breathe very often, and his eyes saw as well in total darkness as they had in daylight, so the darker depths of deep water like this posed no challenge. It was moments like this Kieran was thankful for his transformation all those years ago, though he had not been able to see things that way for a long time after it had happened.

The light of the moon shone down through the clear water for a little distance, just far enough to illuminate the coral reefs. Kieran had at one time in his life assumed all sea creatures slept at night just like humans and dogs and most of the other terrestrial animals with which he was familiar. He had since learned this was not the case, not at all. The reefs were just as alive with the activities of life and death at night as they were during the day. The corals themselves opened up and waved their tiny, feathery fronds in the water, some of them glowing brightly in the darkness as they did so. Sea turtles, which seemed entirely different from their land cousins, glided through the water like birds in the air. Kieran had many years ago witnessed the miraculous life cycle of those beautiful creatures, watched as the tiny baby turtles had wobbled across the sand and into the sea, and then dove in himself to see the transformation of ungainly, finned lumps to speedy mini-versions of their graceful parents. Lobsters, eels, and octopuses emerged to hunt, while sharks prowled the water, lording over all the smaller creatures. One of these, a larger specimen with a snub nose, came closer than Kieran preferred, and he bared his teeth at the creature, issuing a bubbly, underwater growl as he did so. That did the trick, and the shark left off circling the Vampyre. Kieran may be inhumanly strong and fast, but he didn’t fancy testing his luck against the apex predator of the ocean.

The party disintegrated within seconds. Lenore’s head whipped around to locate the source of danger. Her first thought was someone had a weapon, a spear. She looked for Oya, as that was usually her preferred weapon. Lenore spotted her heading for the outer edge of the bonfire, but she’d left her spear on her back. Instead, she was carrying one of the border stones from the campfire. Lenore didn’t know what she was getting into, so she grabbed the most reliable weapon she could think of: fire. She pulled a stray branch from the bonfire and leapt forward. Zach was clumsily trying to stumble away from something, and Lenore ran to flank him. In the light of her torch, a triangular head, large slitted eyes, and a long, slender, legless body appeared. She reared back for a moment and let out a very unladylike swear when she spotted it.

“Zach, get back!” she said, waving wildly in his direction.

Her eyes were locked onto the snake. She heard Zach mutter something incoherently and then a fwump as he tripped in the sand trying to back up.

Lenore, Neal, Eamon, and a handful of other expedition team members stared skyward, marveling at the hulking emerald green balloon lazily floating toward the Bone Port landing site. Numerous other people were gathered on the handsomely terraced observation deck, held back from the edge by a banister of steel and bamboo, as the site was located atop the basalt cliffs above the Giant’s Maw.

The gleaming black fingers of basalt shot up from the land like giant charcoal pencils bound together. The path leading up to the landing site, worn flat over so many years of feet treading up and down it and lined on either side with a rope railing, interrupted the jagged nibs that seemed to grow to all different heights like a garden of onyx grass. The view was spectacular, with the city of Bone Port spreading out below for miles before stopping abruptly to yield to the thick, green, ever-changing tangle of the jungle. Both the landing site below and observation deck above were paved, the bricks arranged in a taupe and ebony herringbone pattern. If there was one thing Bone Port sprang for when it came to aesthetics and pomp, it was the welcome sights and sounds wealthy zeppelin travelers received when they first disembarked. The cherry on the top of this presentation was a small band playing jaunty melodies in the background, creating an atmosphere of cheerful anticipation.

Some of the spectators, like the Zeppelin Appreciation Gang—ZAG for short—were apparently regulars at the weekly event, whilst others were first timers. The latter included most of Lenore’s group and the guests of honor that day: the Arnavi, for whom special seating had been provided.

“Do you reckon they use zeppelins too?” Lenore asked, leaning towards Eamon.

“That’s on my list of things to ask,” Neal said, also not looking her way. He was at least smiling, though.

“Oh, Iggy, why don’t you slip in here?” Lenore offered, seeing a space in front of her open up as some ZAP members moved further down the observation deck. “No more heads in the way. Oh, wait. Engineer Allen, could you scooch over a smidge, please?”

Iggy was looking supremely uncomfortable in the crowd, and her diminutive stature wasn’t helping her view any either.

“Scooch?” Neal replied, finally looking down. His eyes flitted around, and Lenore was certain he was assessing how close the move would place her to the banister and the fatal drop beyond. “Ah, I see what you mean. Here you are, Miss Ruiz.”

Iggy slipped into her new spot. “You can call me Ign…never mind.” Iggy gave up when she saw Neal was already looking up again.

“He wouldn’t anyway,” Lenore whispered. “It’s not you. It’s because it’s not proper.”

Iggy nodded, seeming to take comfort in Lenore’s explanation. “Can you me when they actually start working on the descent, please?”

Lenore smiled at her. “Of course.”

With that, Iggy thanked her, pulled a book from her bag, opened it, and began to read.

The zeppelin continued languorously along its trajectory, and Lenore pulled a pair of longsight glasses from her satchel to take in a magnified view of the machine’s propellers hard at work. Everything else that made up the propulsion system was encased behind steel, but Lenore was happy enough to imagine the movement of the inner workings.

Eventually, long lines were tossed out of the gondola and a team of landers made ready to catch hold of them on the platform below. Lenore touched the edge of Iggy’s book to get her attention and then pointed up to let her know the descent had begun in earnest. The landers were careful with their lines at first, only guiding them, lest they hold on too tightly and risk being dragged or even lifted off the ground by a pesky gust of wind above. The sky was calm today, however, and the balloon held a steady course all the way down. As Lenore watched, her attention was diverted by the regular swivel of Eamon’s head. She put a hand on his arm.

He tried to smile back but failed miserably, so he took her hand instead. “I still worry.”

You can buy Into the Fire here. Dana is our March guest on Read.Write.Repeat! She is a kickass author of Steampunk Fantasy and all sorts of wonderful imaginings. You don’t want to miss what she has to say during the episode, which will air March 18th. Make sure to catch her response to our Proustish Questionnaire on March 16th! Read more about Dana here or check out a all the great posts she has contributed to Kelsey’s website. There is a full list below!

Don’t forget to check out Raven’s Cry, a dark retelling of Swan Lake set in the steampunk fantasy universe of Broken Gears! 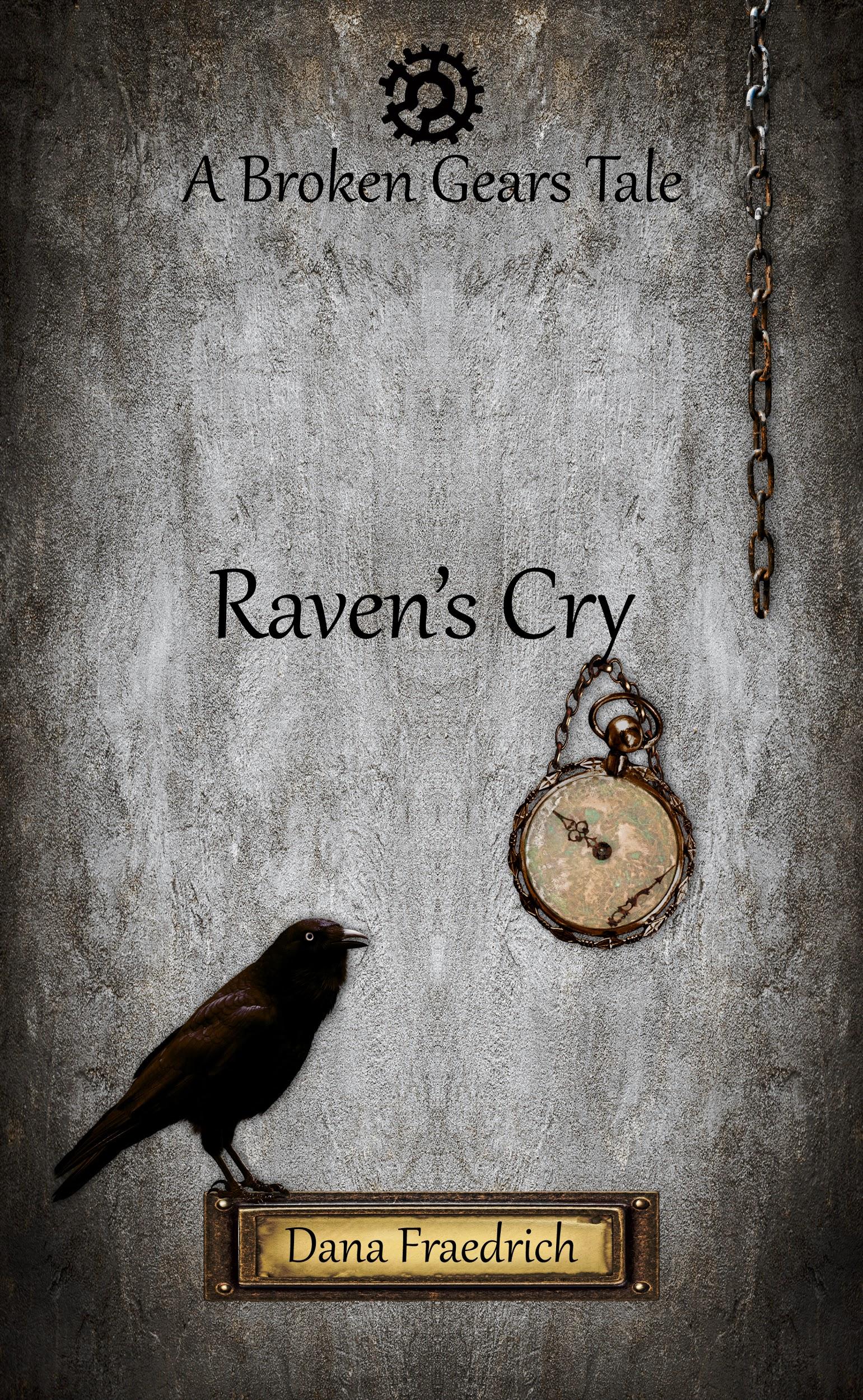 Calandra is happiest when she’s surrounded by quiet, joined only by a book and a cup of tea, never around people and their insufferable need to make small talk. When Nicodemus, a magus with immense power, joins the royal court of Invarnis, Calandra’s life will change forever. As a terrible curse pursues her through the centuries, Calandra will have to overcome captivity, war, and loss.

In this standalone installment, set in Dana Fraedrich’s Broken Gears universe, readers will join Calandra in her battle for freedom, hope, and healing.